THE “2012 MTV MOVIE AWARDS” TO CELEBRATE MOVIES, MUSIC AND THE MAGNETIC APPEAL OF GOING TO THE THEATRE LIVE FROM THE GIBSON AMPHITHEATRE SUNDAY JUNE 3rd at 9PM ET/PT 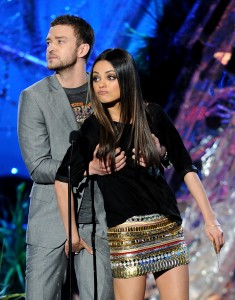 NEW YORK, NY (March 5, 2012) – Fans will fall in love with their favorite movies from the past year all over again and get a first-look at films to come when MTV returns to the Gibson Amphitheatre in Universal City, CA for the “2012 MTV Movie Awards.” The 21st annual award show will air LIVE on Sunday, June 3rd at 9PM (ET/PT). MTV also announced that this year’s telecast will be executive produced by Jesse Ignjatovic of Den of Thieves for the first time.

Known as one of the most outrageous and distinctive televised award shows, the “2012 MTV Movie Awards” will feature its trademark individuality and irreverence. Fusing the network’s musical core with the wonder, scale and energy of the movie-going experience, the telecast is set to provide more laughs, surprises and one-of-a-kind moments with Hollywood’s biggest stars gathering to honor fan-favorites from the past year and beyond.
“Just as Jesse has done with our ‘Video Music Awards’, we know he’ll infuse this year’s ‘Movie Awards’ with creative, musical and cinematic elements that fully tap into the sense of awe our audience experiences in a movie theater,” said Stephen Friedman, President of MTV. “In his inspired hands, this year’s show will be re-imagined to deliver a telecast that reflects our audiences’ favorite films, music and stars.”
The “2012 MTV Movie Awards” will be available to a potential viewing audience of more than 1.2 billion people via MTV’s global network of more than 60 channels reaching nearly 600 million households around the world as well as through syndication. In addition, its convergent programming & content will reach the entire interactive community, via MTV’s more than 200 digital media properties around the world.

To watch video of last year’s biggest moments, get the full list of past show winners and check out fashion and commentary from the shows’ red carpets, please go to MovieAwards.MTV.com.

About MTV:
MTV is the world’s premier youth entertainment brand. With a global reach of more than a half-billion households, MTV is the cultural home of the millennial generation, music fans and artists, and a pioneer in creating innovative programming for young people. MTV reflects and creates pop culture with its Emmy®, Grammy® and Peabody® award-winning content built around compelling storytelling, music discovery and activism across TV, online and mobile. MTV’s sibling networks MTV2 and mtvU each deliver unparalleled customized content for young males, music fans and college students, and its online hub MTV.com is a leading destination for music, news and pop culture. MTV, a unit of Viacom Inc. (NASDAQ: VIA, VIAB), one of the world’s leading creators of programming and content across all media platforms. For more information, go to www.mtvpress.com.

About Den of Thieves:
Founded in 2007 by Jesse Ignjatovic and Evan Prager, Den of Thieves has quickly emerged as a force for ambitious event shows and uniquely stylized reality television series. Using their extensive experience working with talent, Ignjatovic and Prager launched Den of Thieves as the TV arm of the Warner Music Group in 2007. After a successful three year partnership, they branched out and are now fully independent. Den of Thieves continues to create, develop and produce original television.